And special thanks to… Senator Graham will be the first two-time recipient of the Henry M. “Scoop” Jackson Distinguished Service Award, having also received the award in 2012. A great friend of JINSA for many years, he is most deserving of recognition because of his commitment to a strong U.S. national security policy and a robust U.S.-Israel security relationship. He has been an outspoken advocate of JINSA’s work for many years, and he has championed JINSA’s initiative for a U.S.-Israel mutual defense pact in the Senate.

Senator Graham has earned a reputation as one of the strongest proponents of a robust national defense. A frequent visitor to American troops stationed overseas for on-the-ground assessments, Graham has consistently pushed for outcomes in the War on Terror which protect our long-term national security interests.

Before being elected to Congress, Graham compiled a distinguished record in the United States Air Force as he logged six-and-a-half years of service on active duty as an Air Force lawyer. Graham retired from the Air Force Reserves in June 2015 having served his country in uniform for 33 years. He retired at the rank of Colonel. Mr. Ellman is being honored for his strong commitment to advancing JINSA’s mission of promoting a strong U.S. national security and robust U.S.-Israel security relationship. Chairman of the JLE Group, Leon has been on the board of Beit Issie Shapiro, supported FIDF, sponsoring members of their military’s college educations, and supported Tikvot, a non profit which rehabilitates Israel’s victims of terror and wounded soldiers through sports. Leon is a widely respected business leader who has also supported many local programs and charities in the community. In 1982, the Jewish Institute for National Security Affairs (JINSA) was proud to honor Senator Henry M. “Scoop” Jackson with the first “Distinguished Service Award.” After the Senator’s untimely death in 1983, JINSA, in cooperation with Mrs. Helen Jackson, renamed the award in the Senator’s memory.

Today this prestigious award enables JINSA to recognize and thank those leaders whose careers have been distinguished by the principle that is the foundation of JINSA’s work; the belief that the United States requires a strong military capability for both its own security and for that of trustworthy friends and allies. This was the cornerstone of the late Senator Jackson’s visionary policy and it guides JINSA today. Senator Jackson helped define our mandate and our programming is designed to further it.

The Grateful Nation Award, established in 2003, renamed the MG Sidney Shachnow Grateful Nation Award in 2019, is presented annually to six young heroes recognized for having distinguished themselves through superior conduct in the War on Terrorism. Honorees are nominated and selected by their respective service. The honorees come from the enlisted, noncommissioned officer and junior officer ranks. Honorees represent each of the five branches of the U.S. military and the U.S. Special Operations Command.

JINSA’s National Leadership Award is given to an individual for their strong commitment to advancing JINSA’s mission of promoting a strong U.S. national security and robust U.S.-Israel security relationship. 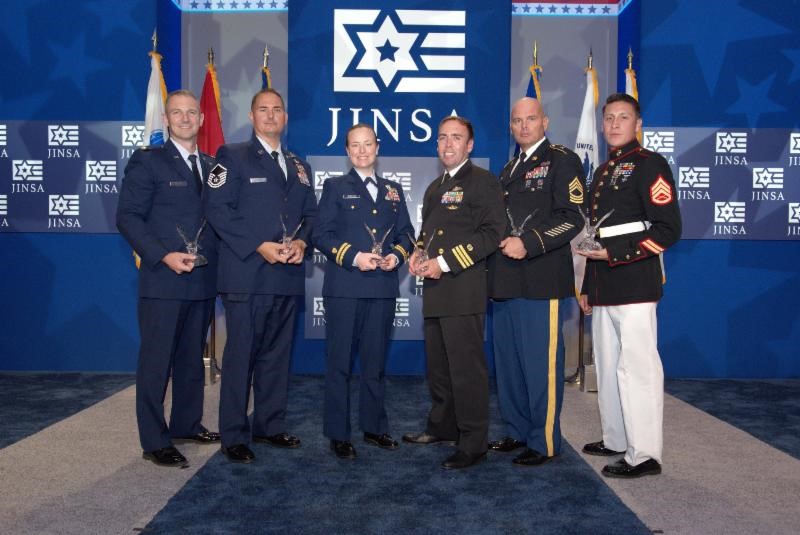