Generals and Admirals Program to Israel

JINSA’s Generals and Admirals (G&A) Program was created in 1981 to educate recently retired U.S. generals and admirals – representatives of the country’s most credible institution, the military – about Israel’s unique security challenges and the importance of a strong U.S.-Israel relationship for America’s national security. To date, more than 450 retired U.S. generals and admirals have participated on the G&A Program, including service chiefs and combatant commanders.

The cornerstone of the program is a trip to Israel (and sometimes Jordan), during which participants meet with top Israeli and Jordanian military, intelligence, and government leaders, including the Israeli Prime Minister, Israeli Minister of Defense, Israel Defense Forces (IDF) Chief of Staff, Director of Mossad, the King of Jordan, the Chief of the General Staff of the Jordanian Armed Forces, and the Director of Jordanian Intelligence.

Participants also visit key strategic sites, including each of Israel’s borders, to learn about Israel’s defense capabilities and security challenges. Upon completion of the program, participants often engage on important policy initiatives through JINSA’s Gemunder Center for Defense and Strategy that strengthen U.S. national security and the U.S.-Israel security relationship. Briefing on the Golan Heights Delegation being briefed by BG Fuchs on the Souther Border 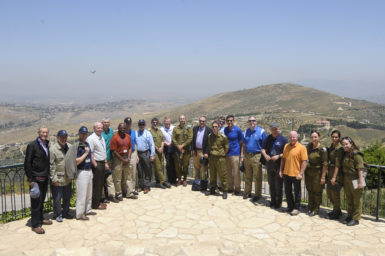