The cornerstone of the program is an eight-day trip to Israel for 30 participants who come from highly selective colleges and educational programs within their respective services and are on career tracks to become generals or admirals. 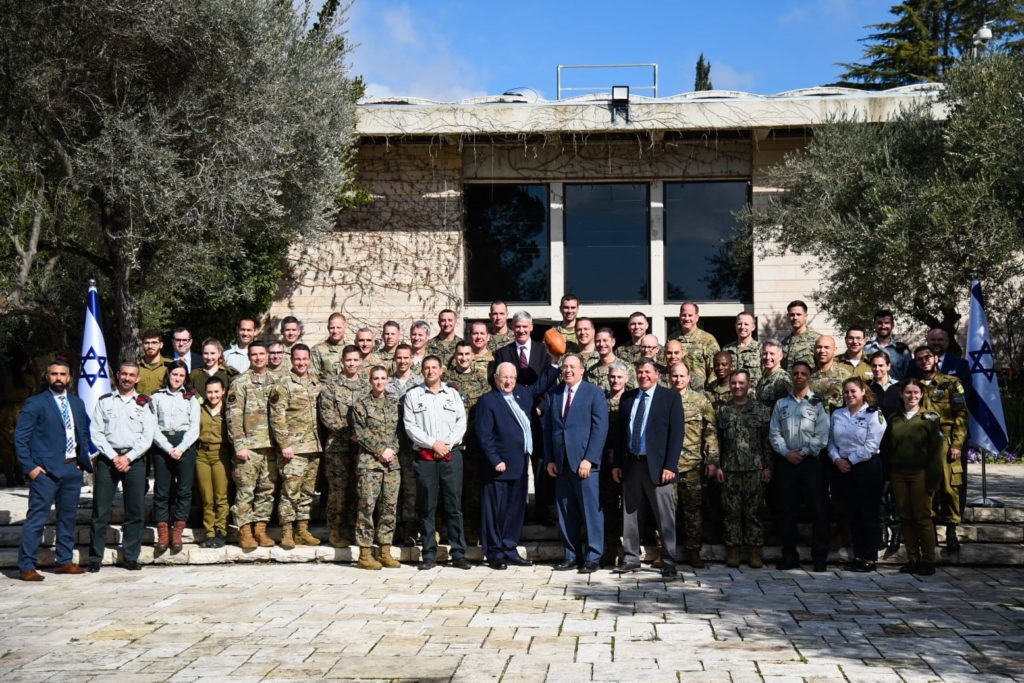 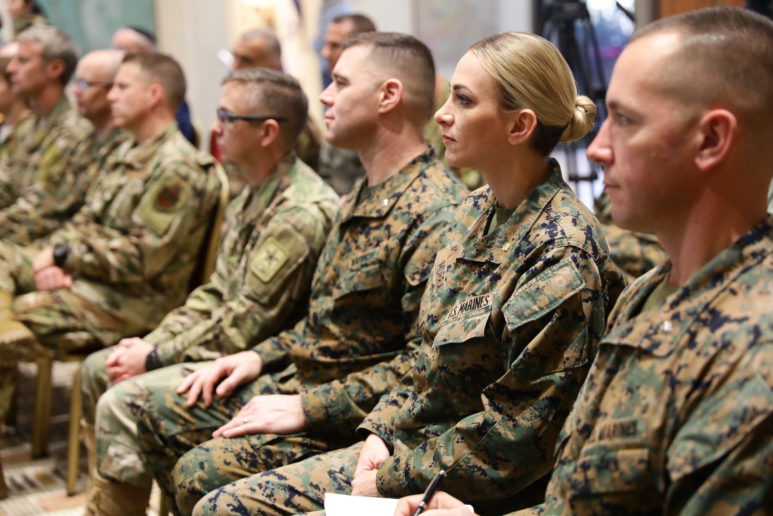 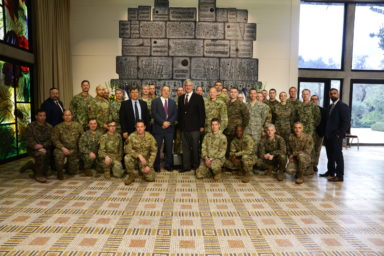 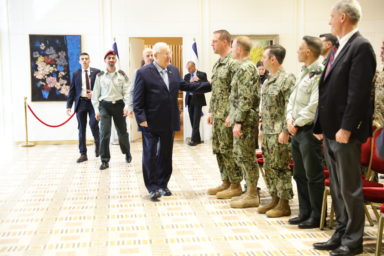 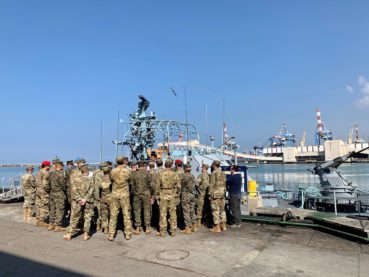 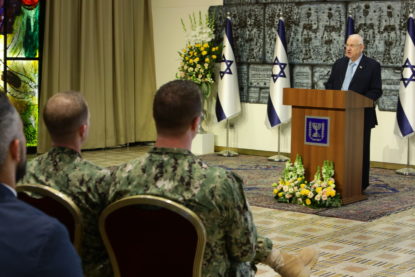 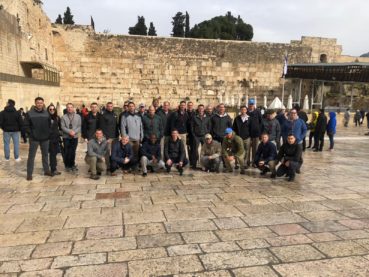 “The JINSA trip really helped my understanding of the region.”
– CENTCOM Planner

“The JINSA program really imparted the resolve, professionalism, and fortitude of the IDF in the face of a challenging security situation. Walking the ground, meeting the IDF, and experiencing some of the culture gave me a new perspective and continued respect for Israel. This was a once in a lifetime experience.”
– 2022 Program Participant

“The JINSA Military Leaders Program enhanced my understanding of regional security dynamics and relationships in ways I could not replicate by study alone. The immersive program balanced lectures, military interactions, industrial engagements, and cultural opportunities to provide a diverse and rewarding experience. I am a better military professional for having participated in this program and I look forward to continued interaction with JINSA.”
– 2022 Program Participant

“Over my 26-year military career year, many changes have taken place in the strategic security environment. These alterations have led to changes in the nature and potency of the threat facing Israel. The JINSA U.S. Military Leaders Program keystone eight-day trip to Israel provides U.S. military strategist and planners with a bespoke lens in which to view these security challenges. If you’re going to be a serious U.S. military strategist or planner and provide your best military advice you have to touch the terror tunnels; you need to meet with the young IDF soldiers who work on the Iron Dome; you need to talk to the Israeli citizens who rely on those Soldiers; you need to walk the diverse landscape, swim in the Mediterranean Sea, and experience the airspace. You need to experience the history to see a better future. Only then will your military strategy or plan really matter.”
– 2022 Program Participant

“The JINSA program and visit to Israel have given me a perspective on how powerful a nation can be when its members share a common sense of duty to contribute to its very existence. Interacting with the IDF and Israeli people, Jewish and non-Jewish, have demonstrated to me how much Israel is capable of and an example to the world.”
– 2021 Program Participant

“The JINSA U.S. Military Leaders Program provides a comprehensive and insightful view of the Israeli strategic perspective. We were immersed in the ancient history of the Jewish homeland, the modern history of the State of Israel, and the geopolitics of the region that contribute to Israel’s strategic challenges. We enjoyed exceptional access to the IDF from soldiers and generals alike who all spoke to us with candor and professionalism. It is clearer to me than ever why the U.S. and Israel share such a strong relationship culturally, ideologically, and strategically. And of course, the VIP treatment by JINSA turned a busy itinerary into a pleasurable experience.”
– 2021 Program Participant

“Understanding Israel’s unique strategic dilemmas in the context of their history, geography, and culture coupled with where they invest to maintain an edge has helped me better understand our own strategic choices and opportunities.”
– 2021 Program Participant

“The JINSA U.S. Military Leaders program was, without question, the best educational experience I have had in over 23years of military service. I gained a deep appreciation of the many and varied threats Israel faces on a daily basis and a concomitant understanding of the profound importance of the U.S.-Israel strategic relationship. The briefings by current and retired IDF officers, and the opportunity to talk with currently-serving IDF personnel, provided context to the threats with which Israel must contend and ideas for ways the U.S and Israel can work together to counter those threats. I was amazed at the professionalism and spirit of innovation displayed by the IDF. The program gave me a strong deep appreciation of the Israeli culture and world-view, and I walked away very impressed with the resilience of the Israeli people. The trip also greatly enhanced my understanding of the multi-millennial ties of the Jewish people to their homeland and the importance of countering the various narratives that seek to downplay those historical ties.”
– 2021 Program Participant

“Having studied the Middle East during my undergrad, and spending time in the region, I thought I understood the complexity of the issues facing Israel.However, being on the ground, walking the borders of Gaza, Lebanon, and the Golan Heights; speaking with Soldiers and civilians who live in a constant shadow of aggression; and experiencing the culture of the Israeli people, opened my eyes to the threat to their plight.Fighting for freedom and existence is a tangible reality for the IDF, not an abstract concept, as it is when Americans deploy to war.

I walk away with a connection to the Israeli people, and an appreciation for their successful struggle to maintain productive, fulfilling lives while living beneath an umbrella of hostility and hatred. Constant opposition would destroy most people, but against all odds, Israelis have used it to be refined into mentally, emotionally, physically stronger people. I hope to be able to instill in my fellow Soldiers and coworkers a renewed sense of duty and loyalty to American values as a result of this incredible experience.”
– 2021 Program Participant

“Israel believes that they face threats from multiple axes – the professionalism and proficiency of their armed forces stands as testament to their determination to face these threats.”
– 2020 Program Participant

“The professionalism and proficiency of the Israel Defense Forces ensures Israel is prepared for the many security challenges it faces. Our ability to better understand the strategic and operational challenges faced by Israel was greatly enhanced, while our appreciation for the Israeli people and their culture was significantly broadened.”
– 2020 Program Participant

“The opportunity to see the Israeli security challenge through the IDF’s eyes was invaluable and the immersion in the region’s rich culture and history was unparalleled to anything I learned or experienced through an American lens.”
– 2020 Program Participant

“There is no better way to understand the complexity of Israel’s security challenges than to walk its borders. However, engaging with our IDF hosts highlighted significance of our special relationship and shared vision.”
– 2020 Program Participant

“It was the best educational trip experience I have ever had in the US military.”
– 2019 Program Participant

“I thought I understood Israeli security issues…but it wasn’t until I stood on a border outpost overlooking Lebanon and Syria, that I could grasp the magnitude and urgency of defending against a determined enemy.”
– USAF Lt Col, F22 Pilot

“Even after hundreds of combat hours in Syria, I didn’t understand how dangerous the Iranian threat is to Israeli national security until I visited Israel on the JINSA trip. This was hands-down the most educational trip in my 19-year career.”
– USAF Lt Col, F22 Pilot

“It is impossible to understand Israeli national security without knowing Israelis. The JINSA trip allowed me to meet Israeli officers and officials and really understand how the culture and history have shaped the IDF.”
– USAF Lt Col, F22 Pilot