Originally from Norlina, N.C., Admiral Kirkland Donald graduated from the United States Naval Academy in 1975 with a Bachelor of Science in Ocean Engineering.

After completing his initial nuclear power and submarine training, he served in USS Batfish (SSN 681), USS Mariano G. Vallejo (SSBN 658), and USS Seahorse (SSN 669). Admiral Donald was Commanding Officer, USS Key West (SSN 722), from October 1990 to February 1993. He served as Commander, Submarine Development Squadron 12 from August 1995 to July 1997. From June 2002 to July 2003, he was assigned as Commander, Submarine Group 8 and Commander, Submarines Allied Naval Forces South in Naples, Italy. In that capacity, he commanded U. S. and allied submarines in the Mediterranean for Operations ACTIVE ENDEAVOUR and IRAQI FREEDOM. Admiral Donald took command of Naval Submarine Forces, Allied Submarine Command, and Task Forces 84 and 144 in Norfolk, VA in October 2003 and served in that capacity until he was selected to become the fifth Director of the Naval Nuclear Propulsion Program. His shore assignments included the Pacific Fleet Nuclear Propulsion Examining Board and the staff of the Director, Naval Nuclear Propulsion. He also served at the Bureau of Naval Personnel, on the Joint Staff, and as Deputy Chief of Staff for C4I, Resources, Requirements and Assessments, U.S. Pacific Fleet.

Admiral Donald assumed duties as the Director, Naval Nuclear Propulsion Program in November 2004 and completed an eight-year term in November 2012. He was transferred to the retired list on 1 January 2013 after a 41-year career in the United States Navy.

In June of 2013, Admiral Donald joined Systems Planning and Analysis, Inc. of Alexandria, VA and served as President and Chief Executive Officer until 2015. He also serves on the Boards of Directors for Entergy Corporation, Naval Submarine League, and for Battelle along with being an Executive Advisor for NexPhase Capital Partners. Admiral Donald is a National Association of Corporate Directors Board Leadership Fellow. 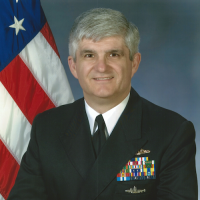