He was born on 9 November 1944 in San Francisco, California, and was raised in Harriman, Tennessee. He received a Bachelor of Science Degree in Education from East Tennessee State University in 1966 and a Masters in Administration from Pepperdine University in 1979. After completion of Officer Candidates School and The Basic School in Quantico, Virginia (1967), he attended Naval Flight School, Pensacola, Florida, and was designated a Naval Aviator in January, 1969. He served in Viet Nam with HMM-262 during 1969-1970, and flew over 1,500 combat missions. Throughout his career, he accumulated over 6,500 flight hours in over 55 different series of aircraft.

Personal decorations included: the Distinguished Service Medal; The Legion of Merit with three gold stars in lieu of second through fourth awards; the Distinguished Flying Cross with gold star in lieu of second award; the Purple Heart; the Air Medal with Single Mission Award and 76 Strike/Flight Awards; Navy Commendation Medal with Combat “V”; and the Navy Achievement Medal. 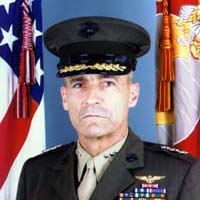