LtGen Richard F. Natonski, USMC (ret.) is the former Commander of U.S. Marine Corps Forces Command, which he held from August 2008 until his retirement on September 8, 2010, after more than 37 years of service.

From 2006-2008, he served as the Deputy Commandant for Plans, Policies and Operations (PP&O). This posting followed his command of the 1st Marine Division where he led the ground assault during the second Battle of Fallujah in Iraq in 2004 and managed security operations in the Al Anbar province during the 2005 Iraqi national elections.

He sits on JINSA’s Board of Advisors and serves as a member of its Hybrid Warfare Task Forces and previously on its Gaza Assessment Task Force. 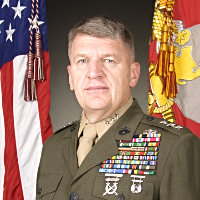