Georgia Military College’s growth has been significant since the arrival of President Caldwell on November 1, 2013.  New campuses were opened in Fayetteville, Dublin, Eastman, Albany, and Zebulon growing the GMC footprint in Georgia to 14 campuses plus an on-line campus. In each of the five years he has been president, enrollments have set new records, with the most recent year reflecting a 5% increase in enrollments from the previous year to 16,317 students.  At the same time, student success has also improved: graduation rates have increased from 25% to 29%.  Programs at GMC have also expanded.  GMC currently offers 24 two-year degree programs and has developed strategic partnerships with high schools, technical schools, and four year colleges to help close gaps with traditionally disadvantaged students.  The college also now offers three four-year B.A.S. programs developed for Technical School graduates in Georgia to continue with their educational goals. GMC has embraced the Governor’s Dual Enrollment Program, and has almost 3,493 high school students attending courses at GMC. Under President Caldwell’s leadership, the College Corps of Cadets has significantly improved.  GMC is a premier Military Junior College – one of only four in the U.S., producing 2nd Lieutenants for the U.S. Army. The Corps of Cadets now also serves as a preparatory school for the United States Military Academy, United States Naval Academy, and the United States Coast Guard Academy – it is known as the Scholars Program. The Cadet program is built upon GMC’s core values of Duty, Honor, and Country and emphasizes the four pillars of leadership excellence—academic excellence, physical fitness, leadership development, and self-discipline.

Georgia Military College Preparatory School (grades 4-12) has also experienced growth under General Caldwell’s leadership, now adding third grade in the upcoming school year. With the addition of the elementary grades, GMC Prep School also expanded its campus footprint with the historic preservation and restoration of Jenkins Hall, and new construction of the Prep School Annex. Those buildings will house grades third through sixth in the Prep School.

Lieutenant General Caldwell was commissioned as an Infantry Officer from the United States Military Academy at West Point in June 1976 with a Bachelor of Science in Engineering. He went on to earn Master’s Degrees from the United States Naval Postgraduate School and from the School for Advanced Military Studies at the U.S. Army Command and General Staff College.  Later, he attended the John F. Kennedy School of Government at Harvard University as a Senior Service College Fellow. He was also selected to serve as a White House Fellow—one of the most prestigious fellowships in our nation.

He also served as Executive Assistant to the Chairman of the Joint Chiefs of Staff, Senior Military Assistant to the Deputy Secretary of Defense, Deputy Director for Operations for the United States Pacific Command, and Assistant Division Commander, 25th Infantry Division.

Lt. Gen. Caldwell received numerous awards and recognition, both domestic and foreign, during his 37 years of distinguished service in the US Army and is a member of the Council on Foreign Relations.

He and his wife, Stephanie, are both originally from Columbus, GA. Two of their children are students at the Georgia Military College Preparatory School, and another attends the United States Military Academy – Westpoint. 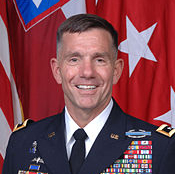